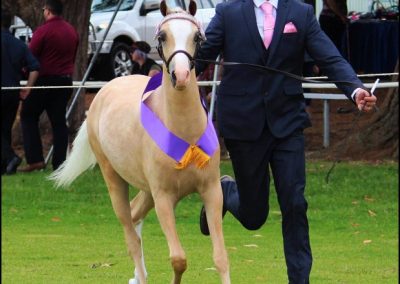 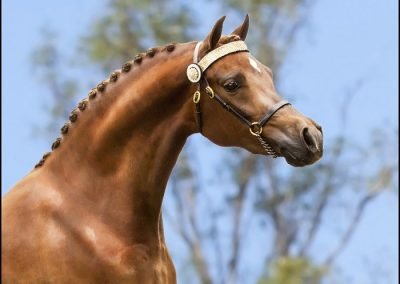 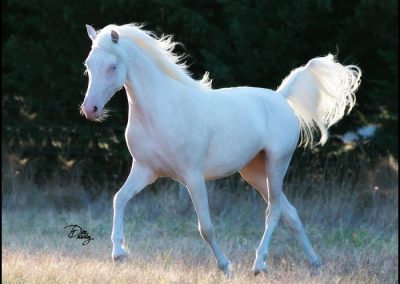 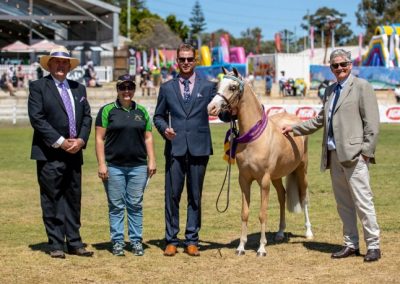 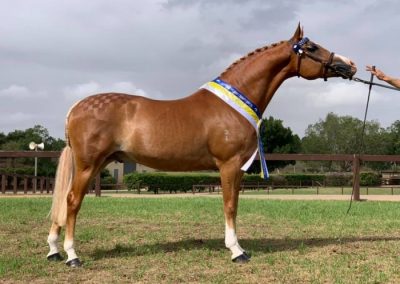 The outstanding Ablue Moon’s Altissimo, proudly owned by Carmel Barnfield, made his show debut under saddle and certainly impressed!  After only eight weeks’ work, he contested four classes at Toowoomba Royal, and was awarded four blue ribbons.  Sincerest congratulations to Carmel, and Elmo’s trainer/rider Racheal Spring, on such a wonderful start to his saddle career.  His education and turnout are a credit to his entire ‘team’!  He was awarded:

Photos with thanks to Lisa Gordon.

Carmel Barnfield’s magnificent colt Ablue Moon’s Altissimo stepped out in style at his first Pony show and had a sensational day.  Beautifully prepared and shown by Karin Panuccio, ‘Elmo’ looked gorgeous and showed extremely well, charming judges and spectators on his way to numerous broadsashes.  He was awarded:

Elmo and Karin were also presented with a special award for Best Presented Exhibit of the Show – congratulations!

We travelled twelve hours to Sydney with the fabulous little Ablue Moon’s Altissimo on board to compete at East Coast, and what a wonderful few days it turned out to be.  ‘Elmo’ coped extremely well with the long trip and extended confinement (only evident in a little bit of extra exuberance in his class), and we couldn’t have asked for better results.  He had the international judge grinning from ear to ear during his class, and was proclaimed ‘awesome’ and ‘a real show horse’.  The Head and Trot classes were very well-supported, with horses of all ages and all Derivative sections competing, and Elmo was the only yearling to place in either class.  By far the smallest horse in the Champion of Champions line, he seemed a little overwhelmed by the lights and the noise, but did us proud with his workout and behaviour.  Thanks to Scott Henshall for showing him beautifully, as always.

Little Elmo has now safely arrived in his new home state of Queensland, having been introduced to his ecstatic owner Carmel Barnfield at the show.  Congratulations to Carmel on her acquisition of this truly special little colt – we look forward to watching his future unfold in Queensland.  From his three classes at East Coast, Elmo was awarded:

Once again we headed to Werribee Park with Elmo to exhibit him on behalf of his owner Carmel Barnfield.  True to form, he moved out beautifully in the ring and was a very good boy all day.  We made the decision not to stay and compete for Supreme, as we had other committments to tend to at home.  From his single class for the day, Elmo was awarded:

Elmo attended his second show for the season, and didn’t disappoint.  As always, this little firecracker was full of attitude and cheekiness outside the ring, but focused and showy once he had entered it.  He showed magnificently all day, taking every opportunity to exhibit his incredible trot and huge front.  Thanks to all those who commented on this little man, and huge congratulations to his loving owner Carmel Barnfield.  From his two classes, and under two different judges, Elmo was awarded:

Elmo made his yearling debut at the A-Class state championships, and certainly started his season with a bang!  Congratulations to Elmo’s proud owner Carmel Barnfield of Wayfield Lodge on his results, and our sincerest thanks to Scott Henshall for his assistance and for showing Elmo to perfection.  Elmo is the first of Zing’s progeny to attend the Vic Champs, which made his result an extra special one for us.  Under international judge Julie Maden, and from a class of top-quality yearlings, Elmo was awarded:

This is the third consecutive year that we have been lucky enough to bring home the trophy for this award.  Even more impressively, it is the second consecutive year in which one of Glenview Silver Harmony’s babies has taken out top prize in this section, with the 2011/12 award going to  her 2011 colt Ablue Moon Pianissimo.

Another big day for ‘Elmo’ and his connections.  Once again, this little star moved and showed fabulously, and was such a good boy.  In some nicely supported classes, he was consistently at the top end of the line, placing second in his Arabian Pony classes to both judges’ eventual Supreme Derivative.  Many thanks to Scott Henshall for showing Elmo so beautifully on behalf of his new owner Carmel Barnfield.  From his six classes for the day, Elmo was awarded:

A great debut for the breathtaking little Ablue Moon’s Altissimo!  ‘Elmo’ contested four classes on behalf of his new owner, and was an absolute star.  In some good classes, he was awarded: